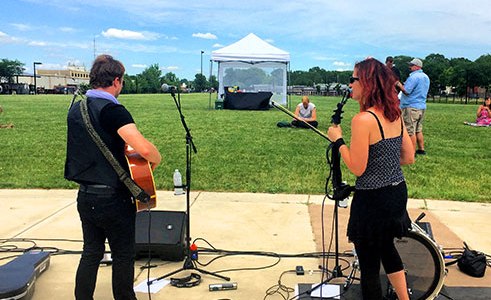 On June 21 I had the privilege of experiencing my first International Make Music Day.  Have you never heard of it?  I hadn’t either, but it is fantastic!  Launched in France in 1982, the idea is to utilize the longest day of the year to absolutely cover a town in live, local music.

Some cities have embraced the event fully, while others are slower to catch on.  Iconic American music cities like Nashville (80 artists playing in 34 locations), Seattle (just 14 artists in 6 locations) and New Orleans (who doesn’t participate at all… at least not yet) were eclipsed by Madison, Wisconsin’s 275 artists playing music at 109 different venues, many artists playing multiple times throughout the day.  Madison is the home of Smart Studios, birthplace of the band Garbage and where so much of the biggest hits of the grunge/alternative wave of the ‘90s came from, so it only makes sense that music is still part of the soul of this city.  You couldn’t drive down a street without hearing live music from a new band every few blocks.  It was outstanding!

I rode along with the rock band Sunspot as they played three concerts around town.  The first gig of the day was bright and early at 9am at the HotelRed.  Nothing like waking up with a hot cup of coffee and some live tunes!  Once the gig ended, it was a mad dash to pack up, run over to Peace Park and start setting up for the next gig.  To our surprise, there was already a sound system in place, manned by one of Madison’s many great audio engineers.  Blankets, provided for the audience (pictured above), it was easy to get in, do a quick sound check and put on a show on a beautiful day.  With enough time to spare to grab a quick drink over at Hawk’s across the street, we finally headed over to Madison’s Central Park for their last gig of the day. 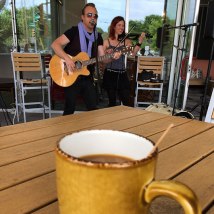 Throughout the day I filmed a handful of their songs and handled their social media needs.  Later on, I cut together footage I got for their song “Sha Ka Ree,” (video below) a song they created as a tribute to Leonard Nimoy for their paranormal/pop culture podcast “See You on the Other Side.”  I shot each rendition of the song handheld, single camera with a Canon D5.  I’m pretty happy with how the edit turned out, but as long as every thing was in focus and audible, the real work was done by Mike & Wendy of Sunspot.

After the gigs, we were able to take in a bunch of live music around town including the bands Guppy Effect (at two venues), the Madison Area Ukulele Initiative and the Getaway Drivers, who played on a second story balcony in a neighborhood.  With the idea for a community to come together to celebrate and appreciate local music, this encapsulated it all.  People flooded the streets, food vendors kept people fed while kids played.

I hope this event continues to grow across the globe.  It’d be a stretch, but I think it should be recognized as a real holiday.  Don’t go to work, but do go out and see live music all day long with your neighbors!  The countdown to Make Music Day-2018 is on.  If you are in a band, don’t let this day pass you by – get involved!

I always say I jump at the opportunity to combine my love of camera work with my love of music.  This past Memorial Day I had the pleasure of flying my DJI Phantom over the 33rd Annual Music-fueled Brat Fest charity event.  It’s a free weekend music festival showcasing upwards of 100 acts while concession proceeds are raised for local charities.

In addition to supporting a great cause and hearing some great tunes, I also put the drone to the test as I few her in the rain.  When it went up there was a light drizzle, but then it became harder.  I decided to try to just make it to the end of the song you can see in the video below before safely grounding it for the rest of the set.  By the end of the song, it was a steady, real rain.

To my surprise and delight, there was ZERO issues with flying in the rain, however, I wouldn’t want to push it more than this (in terms of a full downpour or staying up longer).  Especially at a public event, safety first!

In fact, you’ll notice that a raindrop on the lens created a pretty nice light flair with the yellow stage lights.

Thanks so much to Sunspot and Brat Fest creator Tim Metcalfe for making this shoot happen!

Now enjoy a song from Sunspot, a great band you’ll have to immediately add to your Pandora/Spotify playlists:

All aspects of this site are being re-launched!  Content was removed and is slowly being re-added in a more polished state.  Please keep checking back as we unveil the latest version of Emergence Films!

Thanks for stopping by a site that has nearly nothing on it so far!

Sadly, the last company that hosted my site went out of business and took my content with them.  So frustrating!  I will get back to posting weekly updates on what’s going on in my world in the realm of production/writing/editing/social media and just in general, producing content for clients or a mass audience.  Thanks for hanging in there while I attempt pull this site up by its digital bootstraps and get back to growing!